Since August 2014, The People’s Project has housed 218 people and supported 251 to seek their own housing solutions.

People’s Project lead Julie Nelson said the team was very pleased with the results, but the real winners were the those who had found homes.

Almost all (93 per cent) of the people the project has worked with have retained their accommodation; with 13 per cent now housed for 12 months or longer, 53 per cent between 6-12 months and 32 per cent have been in their new homes for less than six months.

Julie said nobody should underestimate the impact that having a home has on people.

“It is so much more than a roof over their heads. Being without a home can start a snowball effect that can completely degrade a person’s self-worth.

“Project staff often comment about how having a roof over someone’s head instantly changes their demeanour. It’s physical. People hold their heads up higher, as if they’re happy to be seen, instead of often wanting to be invisible. It’s wonderful to witness.” 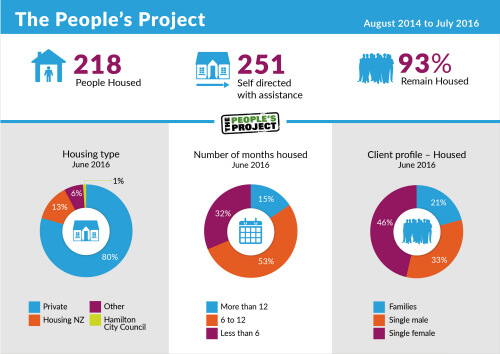 COVID-19: The People's Project is operating at Alert Level 1

We are open, but our office remains closed to 'walk ins'. You will need an appointment, so please phone us first before you head into our office. In HAMILTON phone 0800 437 348 or in TAURANGA phone 0800 198 010. If you have a runny nose, sore throat or cough, please do not come in - get tested and self-isolate until you are cleared by a doctor. The Ministry of Health encourages people to wear a face mask or covering when using public transport. You may be asked to wear a face mask or covering in our office. Thank you.