The People’s Project has adopted the Statistics New Zealand definition of homelessness.

“Living situations where people with no other options to acquire safe and secure housing: are without shelter, in temporary accommodation, sharing accommodation with a household or living in uninhabitable housing.”

For some people, homelessness means sleeping rough on the street or living in cars. For others, it could involve couch-surfing or house-jumping with friends or acquaintances.

Why are people homeless?

Everybody has a different story

Until recently, most of us probably thought of homeless people as those living on the streets. While this situation still exists, the number of people sleeping rough on a regular basis is relatively small.

The fact is, there are different forms of homelessness. 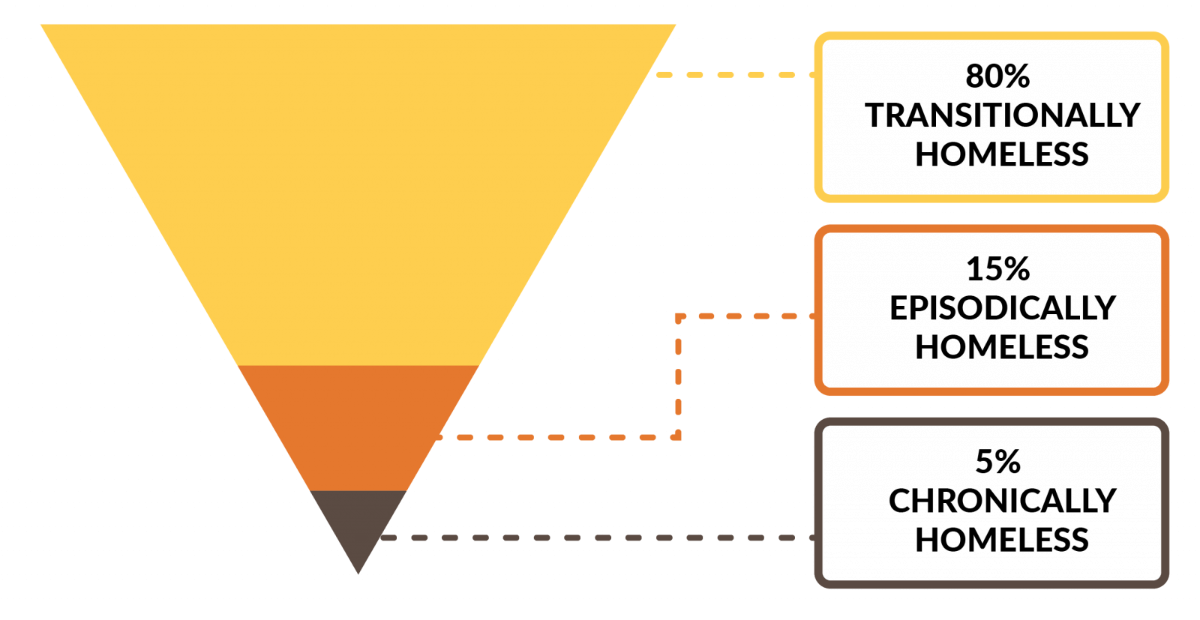 We estimate the number of long-term, chronically homeless people, who have spent more than a year on the streets, is as little as five per cent of the entire homeless population. Of course, one person sleeping on the streets is one too many. In Hamilton in 2014,  this number represented around 80 hard core ‘streeties’, almost all of whom today are now in homes.  In 2018, Tauranga City Council’s by-name count of people sleeping rough and found there were 80 people living on the street in Tauranga.

People who are episodically homeless account for 10-15 per cent of the homeless population. Addiction, mental health issues, trauma and debt have emerged as significant issues for many of the people we work with. A mounting debt situation means that rent goes unpaid and is shortly followed by eviction. Those with long-term addictions require significant support from wrap-around drug and alcohol services. Many also carry a significant debt burden as a result of poor financial skills and typically rely on a benefit as a primary source of income.

The transitionally homeless make up a staggering 80 per cent of the homeless population. Redundancy, relationship or family breakdowns and health issues are just some of the reasons why people in this group become homeless – if only for a short period of time. Families dominate this group and, for some, this could be their first encounter with social services.

When we started working with homeless people, we quickly realised there were some big myths out there. All of which, we can put right.

Don’t people choose to be homeless?

Don’t people need an address to get a benefit?

Every person correctly registered with Work and Income can receive a benefit. The People’s Project makes sure everyone is receiving their entitlement. That said, many are living on less than $100 a week. Many have overwhelming debts and fines.

Are all people who beg homeless?

Worldwide it is recognised that the majority of people who beg are not homeless.

Research also shows that in many cases the money received from begging is used to support an addiction. While there’s a feel good factor for some people in dropping money into a person’s begging cup, it doesn’t actually assist people at all. The public needs to know that when people are begging and saying they’re homeless, that’s not necessarily accurate.

Homelessness can’t be fixed, can it?

There are communities worldwide who are close to ending homelessness. They have done this by adopting a Housing First Model and focusing on ending homelessness rather than managing it. They have done this by collaborating across communities and co-ordinating community resources – most of which already existed. Worldwide, developing a stock of appropriately located and sized affordable housing has been key to success.

“For the love, care and mana you gave us through our times of struggles… you put your heart and soul into helping people from all walks of life.”