The People’s Project supports research which is contributing robust evidence towards the development of a model to end homelessness in New Zealand.

Overseas evidence has shown that people’s wellbeing improves when they have permanent accommodation and ongoing support using the Housing First approach. Furthermore, Housing First has been proven to be more cost-effective than other approaches to homelessness, when interactions with Government services are included in the analysis.

We have partnered with the University of Otago’s He Kainga Oranga Housing and Health Research Programme, Statistics New Zealand and the University of Waikato’s National Institute of Demographic and Economic Analysis (NIDEA) to be part of a five-year research programme which is funded by the Ministry of Business, Innovation and Employment.

The IDI at Statistics NZ links government administrative data, such as health, social welfare, corrections and police data. It allows researchers to look at the de-identified, anonymous interactions of people with these services.

This research began in 2016. It is using the IDI across a wide range of datasets to evaluate outcomes for 390 consenting clients of The People’s Project – up to 30 years before being housed and at two and five years after they were housed. The aim is to show the effect, pre- and post-housing, on people’s wellbeing, and the extent of savings available to government across a range of government-provided services by adequately funding and adopting a Housing First approach. 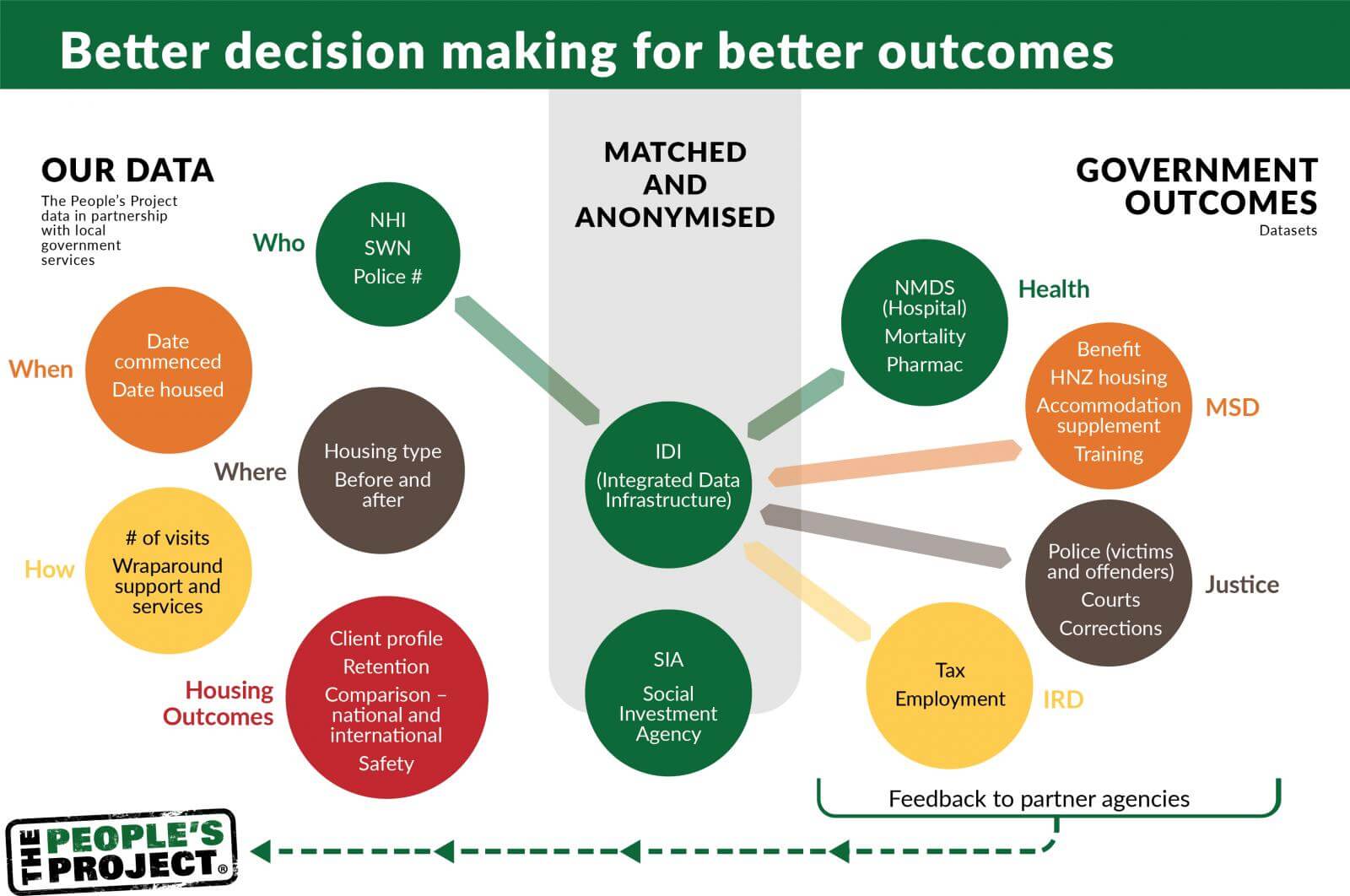 Phase One results of this research have been published in the international journal SSM Population Health  (Service usage by a New Zealand Housing First cohort prior to being housed, Vol 8, August 2019). The published research is available from science.direct.com.

The results debunked the myth that people who are homeless are hard to reach, because the majority (above 90%) of the 390 records were successfully linked to datasets in the IDI. The research also found people’s interactions with health and justice services progressively increased in the five to 15 years before they engaged with The People’s Project for assistance.

The research team is now working on Phase Two (the same measures at two and five years post-housing). The results will be shared when they become available.

2. The People’s Project: a model for ending homelessness in Hamilton. Led by Dr Polly Atatoa Carr

This project is collaboration between NIDEA and The People’s Project, analysing the anonymised records of consenting clients to determine the characteristics of people who have been homeless in Hamilton. NIDEA analysed the demographic characteristics of this group of people compared to the Hamilton population in general, and investigated their experiences of homelessness.

Phase One results are published in Parity magazine (Housing First in Hamilton: who were first housed? Vol 31, Issue 10, Dec 2018): http://chp.org.au/parity/december-2018-issue-housing-first/

Results included understanding people’s levels of debt and which population groups were represented. Phase Two will look at regional comparisons between The People’s Project’s services in Hamilton and Tauranga.

3. Geographies of Homelessness: a case study of The People’s Project. Led by Renee Shum

4. Homelessness in Hamilton: pathways to finding a home. Led by Dr Rebekah Graham

In Phase One, Dr Rebekah Graham conducted in-depth interviews with six people who have been housed by The People’s Project, to investigate what contributed to their homelessness and then what helped them find and stay in a home. This research includes photo-elicitation of the possessions or items that are important to people in their new homes. In Phase Two, Dr Graham is exploring food insecurity and debt amongst people who have been housed through The People’s Project.

Researcher Carole McMinn is interviewing people supported by The People’s Project to determine their pathways into homelessness. Overseas research shows this pathway often begins in childhood. Participants are given the opportunity to describe what type of intervention might have stopped them becoming homeless, and at what point in their journey to homelessness this help would have been welcomed. Carole is a case worker with The People’s Project and is also undertaking her doctorate.