The People’s Project is a unique collaborative initiative in Hamilton with an ambitious goal – to reduce the city’s homeless population to zero by 2016.

The multi-agency project has been operating from its base in Garden Place in the heart of Hamilton’s CBD, since the beginning of August 2014. It brings together 11 organisations and the Wise group with a shared focus on having a community wide response to the complex issue of homelessness.

“People sleeping rough is a complex issue and it will take many of us working together to solve it. We are in the early stages and we don’t have all the answers yet. We do know that it will take a city-wide approach to wraparound the services people need. We have a great team working on this project who are focused on doing whatever is needed to achieve the goal of eliminating homelessness in Hamilton,” Julie said.

She added that the People’s Project is not just about housing though.

Each person seeking assistance receives wraparound support, using a ‘one plan’ approach. Housing is worked on as the first priority while also wrapping health, addictions and other supports around the person. Julie is extremely thankful to the Wise Group board for supporting this important initiative that she is so passionate about.

“At the Wise Group, we care – it’s part of our DNA. The People’s Project couldn’t have happened without the Wise Group board’s decision that it was simply the right thing to do, so they needed to put resources into it.

“It is also fantastic to see such a ‘think outside the square’ approach being taken by so many agencies in Hamilton. We believe this to be the first multi-agency initiative to address homelessness in New Zealand. We have many of the right agencies involved but there is still room for others to be involved to add even more value to this project,” Julie said.

A year in the making

The seeds of The People’s Project were sown in 2013 when the Mayor of Hamilton City held a meeting to explore ways to improve city safety and look into the issue of homelessness, which was increasingly becoming a bigger issue for the city.

This meeting and others that followed highlighted the fact that the existing approaches were not being effective and that efforts needed to involve multi agencies and be more coordinated and collaborative.

“Following these meetings, Julie Nelson from the Wise Group, and I agreed to lead some work in this area. An initial targeted piece of work came out of the closure of a camping ground in the city. Those residing in the camping ground were largely people with multiple and complex needs – mental health, addictions, socially disenfranchised, recently out of prison and most with debts. A small group of agency representatives met with each resident and developed wraparound plans for at least 15 of the 20 about to be evicted. All were rehoused and linked with support services,” Vicki said.

The key is working together

The campground initiative cemented the value of agencies working together and taking a community wide approach to addressing homelessness. It provided a model of working that helped the agencies involved to develop The People’s Project as it is today.

John Macaskill-Smith is chief executive of one of the partner agencies, the Midland Health Network.

“The People’s Project is giving us the opportunity to work with like-minded colleagues to avoid the rules and processes that are getting in the way for a high needs group within the community living the kind of life that we would all want. We are committed to ensuring that we can get the health needs met and ensuring that the traditional ways of providing health are not the thing that gets in the way,” John said.

It’s early days, but we are already seeing results

The People’s Project has only been operating since early August 2014, but already it’s making an impact on the city. More and more clients are literally knocking on the door and asking for help, with the service now working with more than 60 people at any one time.

There have already been a number of success stories with people being housed and supported in numerous other ways. Julie Nelson says that the work is gaining speed as trust is being built in the community and that people are starting to recognise The People’s Project as the place to get help to get a house and different life.

“We are already seeing that directly engaging with people living on the street who are in need of support for housing and other social services has made a positive difference in the central city. We are receiving positive feedback and a significant reduction in complaints from the business community.”

Julie Nelson emphasises that The People’s Project will absolutely bring about fantastic changes in people’s lives.

“You can’t underestimate the impact of having a home on people. It is so much more than just a roof over their heads. Being without a home can start a snowball effect that can completely degrade a person’s selfworth. So we need to intervene early and get in before people’s situations become dire. We need to look at the lifetime costs and effects of homelessness.”

The team, based at The People’s Project office in Garden Place, and remotely in the various agencies, is finding out first-hand how complex the issues are. But this project, for the first time, is benefitting from the value of the key agencies communicating, sharing information and working together to help the people who need it.

They are finding the core issues and learning on a daily basis how the situation has got to where it is today, coming up with ways to do things differently to affect the change. 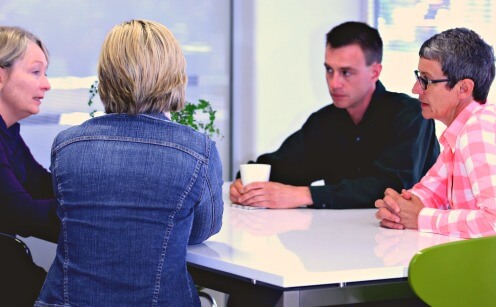